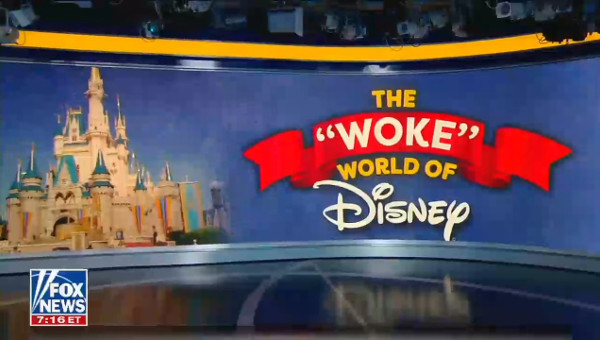 When entertainment company Walt Disney last year began promoting “critical race theory” and adding gender ideology to it this year, the directors were not whistled back by shareholders. But the goals of 50 percent sexual and racial minorities, including Disney characters, caused many consumers to turn their backs on the company. The share price went into free fall.

Disney confronted Florida Republican Gov. Ron DeSantis when he wanted to ban schools from harassing children under the age of ten with radical LGBT + views. The bill in question was worded by opponents as ‘Do not say gay’. Disney, which has a strong presence with ditto privileges in Florida, also felt the need to portray DeSantis as gay and transphobic. This then ended the benefits that Disney enjoys in Florida.

The competition is from the same investors

None of the competitors tried to take advantage of the situation and steal market share from Disney. The shareholders who supported the CEO of Walt Disney in attacking the Republican governor for his views are the same as those of the competitors. As US author and entrepreneur Vivek Ramaswamy tweeted, Walt Disney’s largest shareholders are investment firms Vanguard, Black Rock and State Street.

We also find this trio as the largest shareholders in, for example, the competitor Comcast, which owns Universal Studios and the channel NBC. The same three are also the largest shareholders in Twitter. Now that Elon Musk, including the founder of Tesla, appears to be acquiring all of Twitter’s shares, it is still unknown to what extent he can adjust the company’s price for reasons that will be explained below.

First, the answer to the question of why it is that the same investment companies as the largest shareholders keep popping up with many large listed companies. This has to do with the flight that passive index investment has taken.

Research shows that asset portfolios, ie portfolios managed by asset managers, often do not provide a better return than portfolios that simply mimic a specific index. Vanguard, Black Rock and State Street are among the largest providers of such passive index investments. Because of their size, they can offer them at a low price.

There is another factor of significance. In recent years, many of these asset managers have converted to ESG ideology. These letters stand for Environment, Social and Corporate Governance. ESG was launched by the UN in 2005 and launched a joint conference called ‘Who cares wins’.

The ESG does not consist of a fixed set of criteria that are applied uniformly. Rating agencies such as S&P and MSCI use their own indicators, which, however, show a large degree of overlap. This is different from the ‘Sustainable Development Goals’, which are based on seventeen common goals.

But the similarities are such that it is justified to see the ESG as a translation of the goals of sustainable development to the enterprise level. In both cases, detailed sub-goals are derived from the overall goals, which are formulated qualitatively and usually meet little resistance, and which prescribe exactly what may and may not – and a score is added to this.

By environment On the one hand, criteria that measure the impact of behavior on climate change and the sustainable use of raw materials play an important role. Bee social it is about ‘diversity’ (in its left-wing definition), human rights, consumer protection, animal welfare and inclusive ownership. control deals with topics such as treatment and payment of employees and remuneration of management.

Proponents of the ESG argue that the application of the criteria is not at the expense of the financial returns of the companies involved. In fact, most studies (but by no means all) show a positive relationship between the two, but they can not explain the factors through which this happens. The causal link has also not been proven, so it may well be that it is precisely the already successful companies that can afford the extra costs that result from the use of ESG.

This, combined with the investment theory’s insight that withdrawing investment opportunities from a portfolio reduces the opportunities for additional returns, risk reduction or both, casts doubt on the claim that ESG and returns go hand in hand. Incidentally, it is of course not the case that the use of ESG only increases costs. Some criteria will have a positive effect on the company’s performance.

Characteristics as a coercive measure

An offshoot of ESG is the use of quality labels. Action groups and companies consult consumers over the interpretation of this. It will be much easier to comply with radical demands if producers (with government approval) can pass on the extra costs to the consumer.

This has happened in the Netherlands in recent years with quality brands for, for example, free-range eggs, chicken and dairy products. The sometimes sharp price increases make it harder for people to afford to eat these. For example, the implementation of animal welfare objectives that strengthen climate and sustainability goals.

ESG is pushing companies into a politically correct form

The use of ESG has really taken off. In 2018, more than 80 percent of the world’s largest companies used ESG and / or other responsible investment standards. These accounted for 20 percent of all global investment, with the EU leading. This is expected to grow to about a third by 2025.

The ESG is forcing companies, like countries with sustainable development goals, into a politically correct left-liberal form that puts pressure on them to implement government policies in the areas covered by the criteria. It was not just Disney that felt the need to fight Governor DeSantis. There are many other examples where companies operate in continuation of questionable government policy.

Larry Fink, CEO of Black Rock, with the help of a number of pension funds and mutual fund managers, put pressure on oil company Exxon to reduce investment in fossil fuel extraction. He used their support to get some environmentalists elected to Exxon’s board.

Fink has been closely involved in the World Economic Forum (WEF) for many years and sits on the board of the platform for large international companies founded by Klaus Schwab. WEF actively promotes the use of ESG.

In a project called ‘stakeholder capitalism metrics’, WEF and the four largest international audit firms (EY, KPMG, PwC and Deloitte) have developed an internationally comparable method that companies, governments and NGOs can use for their ESG reports. The WEF and the audit firms consult with governments on the further global implementation of this accounting system.

A fund like ABP declared last year through board chairman (and former CDA politician) Corien Wortmann to withdraw from investing in fossil fuels. Other Dutch pension funds such as PFZW are under strong pressure to do the same. The same applies to banks and insurance companies, where ING recently announced that it will stop financing oil and gas extraction. The Institutional Investors Group on Climate Change, which promotes this type of behavior, has many prominent members, including many Dutch.

What does Musk do?

Politicians and activists who now shout loudest for our independence from Russian gas often come from the same political background as those who for years have wanted to ban investment in fossil fuels, nuclear energy and the arms industry using the ESG. As a result, EU oil and gas production has halved over the past decade, being replaced by Russian gas. However, it is permitted to invest in and subsidies for the burning of biomass.

The extraction of copper, cobalt, lithium and nickel also scores poorly on the ESG criteria, while large quantities of these raw materials are required for the production of batteries. For example, ESG binds Western companies in particular to hands and feet, where others can do their own thing. Elon Musk also acknowledges the danger of ESG and tweeted: ‘I am increasingly convinced that the company’s ESG is the Devil incarnate’.

Wouter Roorda publishes regularly in Wynia’s Week on matters which the power would rather have kept hidden. Do you support our much-needed, independent reporting? You can donate HERE Thank you!