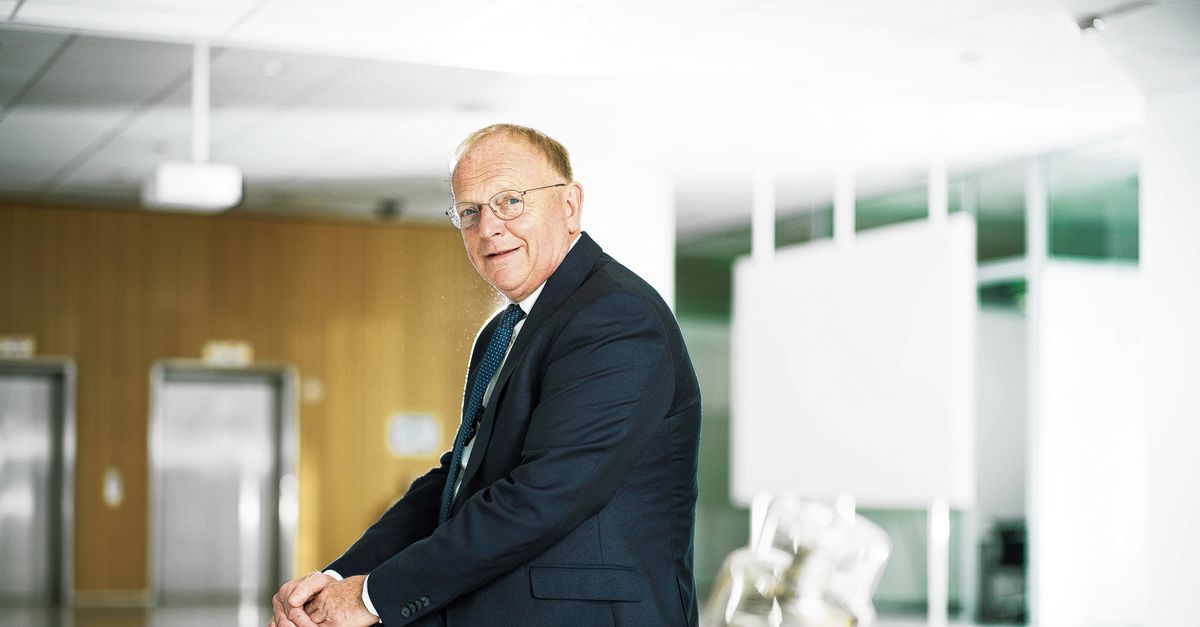 Kees Smaling (64) places a weathered leather bag on the table. “Maybe it would be nice to show you that.” He pulls out a gray, thick cell phone with solid buttons. Smaling was involved in the launch of the device 25 years ago, as director of telecommunications at Siemens Holland. “We are originally engineers at Siemens: we think in technology. We were the first to have a color screen. We were the first without an antenna to pull out. But if you look at the case… Nokia, Samsung – they really had “I think we did not make it.”

Smaling has worked for the German electronics company since he was 28. First in the department of heart film, among other things. At the age of 39, he became director of the Dutch telecommunications department. He then headed the Dutch health department for fourteen years. He is retiring by September. Colleague Paul Riswick has already taken over much of his work as an instructor.

Smaling once studied telecommunications. With his engineering character, he often looked with amazement at the healthcare sector. He experienced the revolution in telecommunications, so pretty much everyone now has a cell phone. From that “cowboy world” he came into care. Innovation is much slower there, so he, and efficiency seems like a dirty word.

What did you encounter when you switched to healthcare fourteen years ago?

“Well, not the speed. It’s really … slow. Innovation decisions are not made quickly.

“We hear a lot about the shortage of health care, there are no people available. At the same time, there are many untapped automation solutions. Take the waiting times in the operating rooms. Entire medical teams often have to wait for the right scalps and other equipment to be obtained, otherwise it turns out that the wrong operating kits are lying around. We have developed a system with sensors on units, with which you can follow the logistics flow and plan smartly. How to prevent it. At Albert Heijn, they also know through automation that if someone takes two packets of coffee, they have to refill the coffee. But that’s not how health care works. Efficiency is the wrong word there. ”

Hospital administrators look glassy when they hear this?

“I’m surprised. We have about eighty hospitals. 95 percent of what they do is standard. For example, someone comes in with a broken leg, gets a scan for first aid, plaster, etc. It’s the same in Maastricht as in Groningen. It is based on the same protocols, but each hospital wants to organize its processes differently with its own IT system, its own forms.

“A director of a large teaching hospital once said it aptly. I told my story about what can be done more effectively, about workflows, and he said: ‘Kees, you know, people work in nursing who want to provide care based on their feelings, their hearts. Many leaders are doctors of origin. They do not want to worry about efficiency. ‘

So when it comes to staff shortages, do not you just need more hands?

“I will first make a good analysis of how it can be done more efficiently. We have come a long way with that. For example, in the Netherlands we have more than a hundred laboratories that perform blood tests. Many employ hundreds of people. While five to ten laboratories would be sufficient. ”

Five laboratories in the Netherlands, is not it inconvenient? Cars carrying medical equipment have to drive much longer.

“We once made a proposal for a megalab. But we had misunderstood, we had thought too much as engineers. I still remember how we presented it: ‘We can do less with so many laboratory technicians, we need so little less. clinical chemists’. But we told that in a room where many of those people were present. Well, then you do not get your hands dirty. ”

Smaling grew up in Jutphaas, now called Nieuwegein. Technology is the future, his father told him. “I felt I was failing if I could not fix anything myself – television, radios. Also my car and – I do not know if I should say – my tuned moped. I’m still trying to keep up, but I have not been able to repair everything myself in recent years. ”

What his father said, Smaling repeated to his own children. “Go to engineering. It’s phenomenal what’s going on there.”

In recent years at Siemens, Smaling has entered into extensive agreements with thirteen hospitals partnerships in imaging. “We say: give us a fifteen year contract, pay a fixed contract fairy and we supply the most modern equipment. We update, predict when parts will break and repair them in advance – overnight or on weekends. At other hospitals, they simply shut down MRI machines and cancel patients. Can you not imagine that they at Heineken stop one afternoon for a repair on a production line through which bottles fly at 40 kilometers per hour?

What would you most like to see happen in healthcare after your retirement?

“I hope that the hospitals dare to take a step further. Now a CT scanner requires 2.8 people with a full-time job, sometimes more. Units stand still because there are too few employees. Could it not be more convenient? What if non-medically trained people in a steward-like position accompany patients during these scans instead of nurses? We desperately need them for other things.

“We can also organize the analyzes more conveniently, for example by analyzing scans centrally, externally. With artificial intelligence, an initial analysis can be made, after which a doctor validates it. In Brazil, we are already doing remote imaging research with artificial intelligence. We are now discussing this with independent clinics. They are much more involved in that kind of thing than the hospitals themselves. ”

The danger with artificial intelligence, AI, is that doctors rely too much on software. If there is something wrong with the data that is causing the system to advise incorrectly, it will go wrong. It seems they are exciting in the hospitals.

“Not me. In the Netherlands, about two thousand people die every year as a result of medical, human, avoidable mistakes. It’s six a day. But the system makes no mistakes. It’s not possible either: it just follows calculation rules. They are have been investigated by the supervisory authorities. ”

AI is becoming more important in healthcare. Where does the biggest competition come from?

“If we do not pay attention, it will come from Asia. We have come a long way in the United States and Europe, but privacy rules make it much harder to research patient data. Asians have much easier access to data than we have. We have raised this with the European Commission with the sector, including with Philips.

“In my telecom time, I saw how the Netherlands handed over the technology to Asia. KPN then gave its largest order to Huawei. At the time, Prime Minister Balkenende clapped loudly, ‘Look, we’ve picked up Huawei.’ Now we doubt it was wise.

“In the healthcare sector, it helps that we work very closely with science. Asians have a harder time with that. Let us not be too disturbed by what happened in telecommunications, we said to each other. If we continue to make products with science, we will always keep the lead. ”

Globally, Siemens Healthineers employs 66,000 people and this medical division of the German group has a turnover of 18 billion euros. In the Netherlands, the division sells MRI, CT and laboratory equipment from The Hague. There are also facilities for research and development in Eindhoven.

A version of this article was also published in the newspaper on May 2, 2022