ORANJESTAD – “I would not go up to Parkietenbos to look, there is also radioactive waste and asbestos”, Secretary of State Alexandra van Huffelen (Kingdom Relations) is told by worried citizens fighting against the mountain of waste. They are very happy that a Dutch minister is finally listening to them. 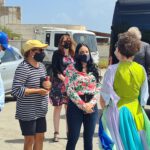 Anouk Balentina in conversation with Secretary of State Van Huffelen

The visit was added to her crowded program at the last minute. This also gives the well-known Aruban landfill activist Anouk Balentina the opportunity to interest a Dutch minister in this ‘years-long violation of human rights in the Kingdom that no one is doing anything about’.

“I only heard about it a few hours in advance, I had to quickly arrange a babysitter for my children. But I’m so happy. It gives me so much energy to keep going, ”says Balentina. She had previously been ‘deeply disappointed’ when it turned out that she would not become one of the citizens that Van Huffelen had to talk to during her introductory trip to the islands.
One day before her arrival, Balentina sent another open letter to the media: 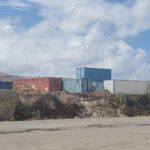 Just before Van Huffelen’s visit, there are suddenly containers blocking the view of Parkietenbos. 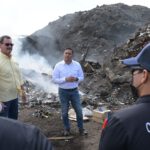 One day before Van Huffelen’s visit, the Aruban Minister of the Environment Ursell Arends takes an inspection tour of Parkietenbos.

“I would like to thank you many times because your arrival creates activity with our directors. For suddenly, all sorts of people and agencies are pushing for the exterior of Parkietenbos to look great. (…) And that is why today, now that you are here and driving by, I am happy, very happy, because then local residents also have a day of rest. No stench, no toxic substances to inhale. Finally a day of clean air. ”

Whether that letter convinced the Secretary of State to talk to her anyway is still unknown. However, Van Huffelen is the first Dutch minister in a long time not to dismiss Parkietenbos with ‘national affairs’. In other words, it is a matter for the Aruban Government, in which the Kingdom / Netherlands can not interfere.

A different voice can be heard from her than from former State Secretaries / Ministers of State Affairs. They were mainly aiming for a well-run household book to get Aruba out of the red box. Finances remain important, Van Huffelen admits, but she makes it clear that there is more she would like to work hard for. Especially in the field of human rights and social inequality.

“I definitely want to work hard for it, and that’s because, I think, it’s incredibly important, huh? Education is important to ensure that poverty issues are tackled. Because without it, you can not let your land grow and flourish. ” And she says to the citizens of Parkietenbos: “I want to cooperate with the government (in Aruba, ed.) On this. I think it is very important to tackle this problem as well. ” 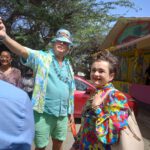 Elvis López from Ateliers’89 shows Van Huffelen around the art center. It’s pretty worn out. The Secretary of State says he also wants to champion the culture of the islands.

Van Huffelen says he wants to hold local governments accountable for the problems, but in the end he mainly wants to tackle them ‘in cooperation’. And as agreed in the new coalition agreement, she says, greater funds will also be made available to the Caribbean countries. What can the citizens of the islands expect from the Secretary of State concretely and in the short term?

“It’s still early, not true. I’m getting acquainted. But for next time, I definitely think I would invest a lot more in it. More specifically: the Netherlands will provide resources to make energy supply more sustainable and tackle the poverty problem.”