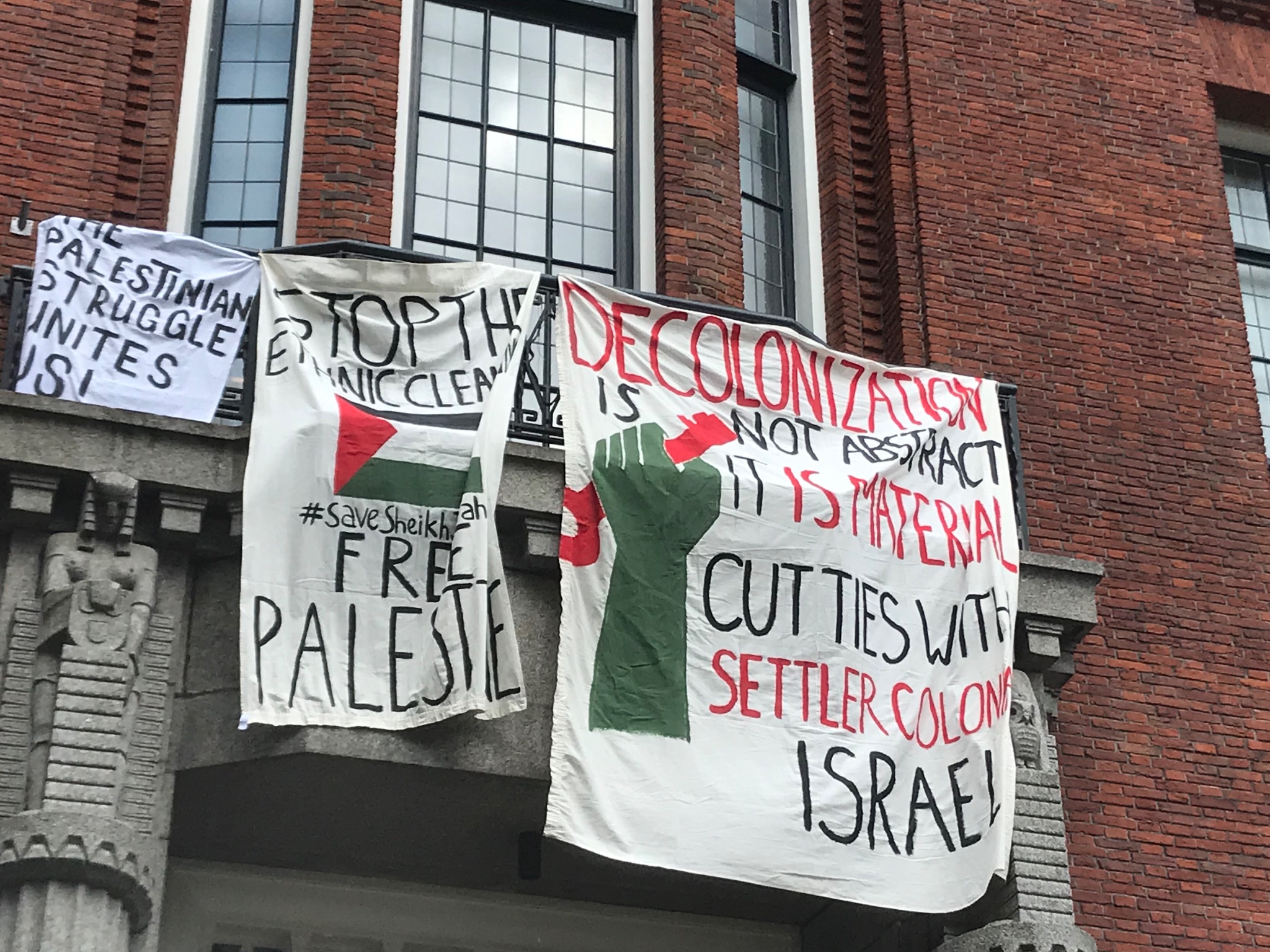 “We work and study at this university,” explains PhD student Zouhair Hammana of the Erasmus School of Color (ESoC). “We want to feel safe here. When you see that there is a double standard that one region is more important than another, and therefore that some lives are more important than others, it does not feel safe. ”

The people behind ESoC and EUC Collxctive think it is only good that political statements and support in the form of an emergency fund during the war in Ukraine are possible. “It’s the kind of care – centered approach to education that we continually would like to see ”, they write in a letter to the management. The university’s position has been called ‘selective solidarity, hypocritical and racist’ by the letter writers.

On Tuesday, the students held a sit-in on the Woudestein campus. This protest was directed against the EUR. The university refused to condemn Israel’s actions last year. Then the Gaza Strip was bombed and Palestinians were thrown out of their homes for Israel. The Palestinian flag and pro-Palestinian banners were not allowed to hang on the facade of the EUC as a protest. University policy would not allow buildings to be used for political utterances.

The protest and the letter coincide with the Israeli apartheid week. Since 2005, this week has focused on ‘the Palestinian freedom struggle and other situations involving racism, oppression and discrimination’. Meetings are arranged all over the world at universities, among others. This year, Rotterdam (student) organizations are also joining us. They took part in protests in The Hague and Utrecht on Monday and Tuesday.

“We want to be clear about that,” writes Rector Magnificus Annelien Bredenoord in a response to the two organizations. “We deplore all conflicts in the world where there are victims, human rights are being violated and / or minorities are trapped. We are for peace and respect. “

The university also gives two explanations as to why it issued a statement on Ukraine. “The suffering is now getting even closer because Ukraine borders directly on the EU,” reads the first. The second is the condemnation of Russian aggression by the Dutch government and the EU. The Minister of Education has called on educational institutions to freeze all relations with Russia. “EUR has responded to this call in connection with the Dutch universities.”

Over the last few days, several higher education institutions – from universities to university colleges to universities of applied sciences – have issued statements of support and solidarity with the people of Ukraine. We think it is great that educational institutions are announcing their support and solidarity to their students and staff. We also think it’s great that they offer resources and opportunities to defer deadlines to students and staff affected by the war in Ukraine. These are the kind of care-centered approaches to education we always want to see.

At the same time, we cannot ignore the selective solidarity, hypocrisy and racism of educational institutions that have previously claimed neutrality. To illustrate, a year ago, during the brutal bombing of Gaza and the continued expulsion and expulsion of Palestinians from their homes, various student and staff collectives and individuals asked the same institutions for a public (approved) declaration in support of Palestine. We were met with responses such as: “we can not issue a statement in support of Palestine, because then we would have to issue statements in support of everything that is happening in the world” or just downright “no.” In 2020, the flag of a Palestinian student was confiscated by campus security. A year later, several banners were dropped at EUC, WDKA, and the Piet Zwart Institute was put down for expressing political statements about university buildings because institutions “can not give the impression that we are taking sides”1which is not a paraphrased excerpt but a direct quote from staff representing the above institutions.

Currently around the EUR campus there are numerous flags and banners that express
the university’s solidarity with Ukrainian scholars and students. At the same time, WDKA students are encouraged to attend a student-organized workshop to make banners in support of Ukraine: highlights that the university can actually promote such student initiatives. The same attitude was not taken towards students who expressed their solidarity with Palestine. Instead, they were directed to sources that could “give participants insight into some of the historical and contemporary complexities that are often overlooked in the media”2 so they could “prepare” for a discussion in which they experienced continuous silence.

Palestinian students who could not focus on their coursework because of the brutality, malice, and malice perpetrated against the people of Palestine would have to go to unreasonable distance to prove that they did not actually have the right mindset to hand in a paper on time. It is clearly double-edged. Double standards we have seen from media coverage of refugees and refugees to various railway companies offering free transport and countries opening their borders to Ukrainian refugees, to our own universities extending their support and solidarity to the people of Ukraine. None of these aforementioned things were ever offered to refugees from the global south. Nor have these universities ever extended their support and solidarity to countries from the global south. We can only conclude that these extensions of grace, humanity, courtesy, care and love are extremely racialized.

With all this in mind, we reiterate our demands and we encourage institution (s) to reflect on theirs
hypocrisy and double standards and extend the solidarity they offer white, European bodies to all individuals.

Repetition of requirements:
● Boycott and divest companies and institutions that maintain (settle) the colonial
violence against the earth and life
● Cut the ribbons for Tel Aviv University
● Cut the ribbons for Ban-Ilan University
● Requirement by ABP to sell from Israeli companies
● Requirement by ABP to divest companies investing in Myanmar’s junta
● Cut ribbon with Shell
● Take diversity and inclusivity seriously, in addition to the marketing / PR level
● Take decolonization seriously, beyond its uses as a metaphor
● Take black life seriously, in addition to the empty statements
● Take the settlement / abolition of patriarchy seriously
● Take the settlement / abolition of heteronormativity seriously
● Take the settlement / abolition of racial capitalism seriously
● Take the settlement / abolition of coloniality seriously
Here are some links that may serve as reminders of past students’ and staff’s attempts at
contact the institution:
https://www.erasmusmagazine.nl/en/2021/06/09/dear-eur-action-still-demanded-ii/
https://www.dub.uu.nl/en/opinion/utrecht-university-cut-ties-israeli-universities
https://networkcultures.org/entreprecariat/notes-on-the-wdkas-pro-palestine-resistance-banner-removal/
https://soundcloud.com/euc-collxctive/collxctive-podcast-v2
https://www.ipetitions.com/petition/double-standards-on-free-palestine-banner-at