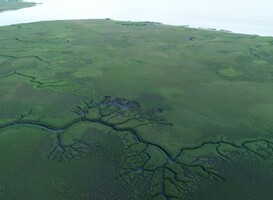 High and low bogs, salt marshes, mangrove forests and seagrass beds cover only 1 percent of the earth’s total surface, but absorb more than 20 percent of all CO2 absorbed by ecosystems worldwide. This unique property arises because plants build these wet landscapes. During the landscaping process, an enormous amount of CO2 is absorbed and fixed in the soil. This is what researchers from Utrecht University, the Royal Institute for Sea Research (NIOZ), Radboud University and the University of Groningen are demonstrating in a study in which they examine all recent scientific literature.

In their study, the team shows that oceans and forests have the most CO2 stored worldwide, followed by wetlands. “When we look at the amount of stored CO2 collected per square meter, it turns out that wetlands store about five times more CO2 than forests and as much as 500 times more than the oceans,” says lead author Ralph Temmink, ecologist and assistant professor at the University of Groningen, University of Utrecht. “High and low bogs, salt marshes, mangrove forests and seagrass fields are therefore ‘hotspots’ for CO2 storage.”

When the team zooms in on how these ‘hotspots’ work, it turns out that these wetlands are all built of landscape plants that lend a hand in growing close together; a process that also boosts CO2 uptake. In raised bogs, peat bogs act as a kind of fungus – together they contain a lot of rainwater, which stimulates their own growth. Beneath the living peat bogs, the remains of dead peat bogs pile up. Because that layer, sometimes up to 10 meters thick, is permanently under water, the dead remains are hardly decomposed, so a lot of CO2 is retained. In low bogs and coastal swamps, plants retain dead plant debris with their root mat. From here nutrients are released so that the plants grow better and better. At the same time, the plant remains accumulate in the soaked wet soil and form a thick layer of soil, in which a lot of CO2 is stored, just like in raised bogs.

Although wetlands are crucial in the fight against climate change, 1 percent a year of these ecosystems are lost worldwide due to human intervention. Recycling and pollution disrupt the landscaping processes. This releases huge amounts of CO2 from the swamp soils. In total, it is about 5 percent of our global annual CO2 emissions.

More than 50 percent of all wetland restoration attempts fail because the landscaping properties of the plants are not adequately taken into account or taken into account. “Recycling is much more successful by placing the plants in large, dense clumps, mimicking their landscaping properties or by simply restoring very large surfaces at once,” says Tjisse van der Heide, researcher at NIOZ and professor of coastal ecology at the University of Groningen . University of Groningen. “The good news is that with this knowledge, large-scale restoration of these important wetlands is now within reach.”

“We support the research and are pleased with these results,” said Teo Wams, director of nature conservation at the Nature Monument; “It shows how important peat areas and salt marshes are, and that we must be extremely careful with these valuable ecosystems. In addition, this knowledge helps us in the management and further restoration of these unique natural areas ”. The industry also sees opportunities. “It is not without reason that for years we have contributed to research into the recycling of these CO2-binding ecosystems. It is an important aspect of Building with Nature, and we expect it to become an increasingly important part of water construction projects in the future, “says Mark van Koningsveld, R&D and Innovation Manager at the international dredging company Van Oord.