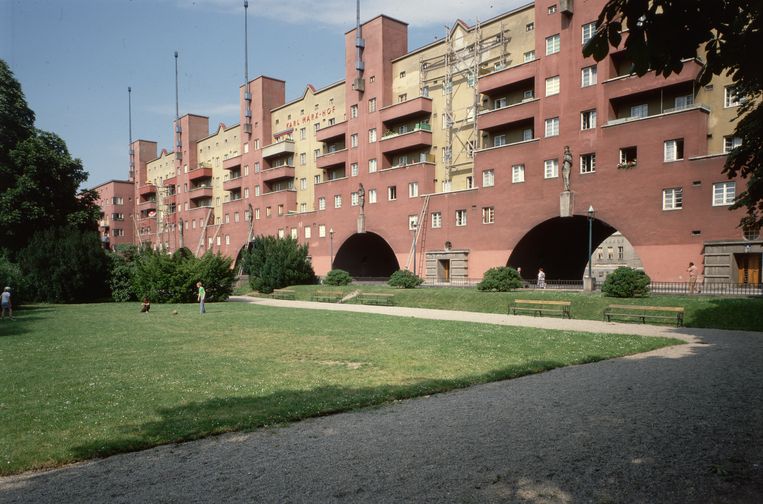 Unlike in Amsterdam, social housing in Vienna is also intended for the middle class. Those who earn less than 3,500 euros a month are eligible. But there are also problems in ‘tenant paradise’ Vienna.

There is a palace on Heiligenstädter Strasse in Vienna. Not for the Habsburg emperors of the past, but for the ordinary Viennese. The name: the Karl-Marx Court. The complex, which is more than a kilometer long, has 1268 apartments and has been inhabited since 1930. It is also called ‘People’s Versailles’, with the many green areas, playgrounds and even its own post office. A paradise for the proletariat.

In one of the courtyards there is a text on the facade: ‘Built by the municipality of Vienna.’ As you walk through the Austrian capital, you will see them everywhere. They are a legacy of ‘Rotes Wien’, as the Vienna ruled by the Social Democrats between 1919 and 1934 is called. To combat the housing shortage, 61,000 homes were built from the ground up.

There was no room in fascist Austria for a ‘red’ Vienna between 1934 and 1945, but after the war the Social Democrats returned. “Vienna continued to build social housing for a long time,” says Yuri Kazepov, professor of urban sociology at the University of Vienna. “Until 2004, to be exact. Then it was quiet for a while, but in 2015 they started again. ” The municipality now owns 220,000 homes, which is almost a quarter of the total housing stock.

A city of tenants

Vienna is a rental city. More than three-quarters of Viennese rents, according to figures from 2018. Of these, 22 percent live in houses managed by the city. The prices are quite reasonable: the municipality charges around 650 euros for a three-room apartment. Another fifth of Viennese live in housing associations. They are more expensive and sometimes a (large) payment has to be paid, but the rent is limited.

About 22 percent of Viennese rent privately and are protected from exorbitant prices, for example through subsidies or price limits. The remaining group of tenants, about one in ten Viennese, are at the mercy of the free market.

“For a long time, the housing markets in Amsterdam and Vienna were very similar,” says social geographer Justin Kadi, assistant professor at Vienna University of Technology. He took his PhD from the University of Amsterdam, so he knows well the Dutch situation. “During the 1990s, things started to stand out. In Amsterdam, housing association homes were sold on a large scale, in Vienna only on a very small scale.”

The share of housing association housing in Amsterdam fell from 58 percent in 1995 to more than 40 percent today. In Vienna, on the other hand, more homes have fallen into the hands of the municipality and the companies. However, Vienna has more freedom to make its own policy, Kadi emphasizes. ‘Austria is a federation, Vienna is a federal state. Not just a municipality. ”

Another difference: Vienna’s social rent is not only for the lowest incomes. It increases the social mix. Anyone earning less than 3,500 euros a month is eligible for a municipal house. Servants and architects live next to mechanics and accountants. “A colleague of mine lives in social housing,” says Professor Kazepov. “He lived there before he became a professor, but was able to stay.”

Is Vienna a tenant’s paradise? The answer is easy to guess: the housing market also has problems. Dutchman Jaimy van Overeem (37) sees this too. He has lived in Vienna since 2003. Thanks to a financial accident, he and his partner were able to buy an apartment in 2016. “At that time, we paid 4,500 euros per square meter. Now it would be 8,000 euros. ”

Until then, he lived in rented apartments. The first from a housing association, the second private person. “I was lucky with it. Wonderful altbau, about 55 square meters. I paid 580 euros, but they could easily have asked for 800 for it then, in 2009. And now much more. ”

Prices in the free sector are rising – and fast. Social geographer Kadi: “Over the past ten years, rents have risen by more than 60 percent. The average income is about 25 percent. ”

A number of issues meet around the free rent. Vienna has grown rapidly in recent decades. There are waiting lists for cheap municipal housing – not as long as in Amsterdam, but some years for the most popular housing – so newcomers must rely on the free sector.

Not a problem for rich expats, but for poorer, often Eastern European migrants. Meanwhile, since 1991, the share of free rent in the total housing stock has risen from 3 to 10 percent. More and more houses have temporary contracts. The rent can be increased subsequently.

Nevertheless, the situation in Vienna is incomparable with the situation in some other European capitals, Kadi and Kazepov emphasize. The latter comes with a telling statistic: “An important rule of thumb is: If people spend more than 40 percent of their income on housing expenses, the city is not affordable. In Vienna it is 18 percent, in London 62 percent. ”

Van Overeem, who studied in the English capital and works in the cultural sector, agrees. “Vienna is getting more expensive, but it is far from Amsterdam, let alone London. Even if you do not earn much here, you can live quite well. ”

Also listen to our podcast on the housing market in Amsterdam:


Not only the Netherlands is experiencing a housing crisis: According to a report from HousingAnywhere, (rental) prices have also skyrocketed elsewhere in Europe. By leader Paris (average 1964 euros for a month’s rent) follows London (1850 euros). The remarkable thing about the English capital is that the rise in house prices was halted for some time around 2017. The reason was, among other things, a number of tax measures aimed at so-called buy-to-let investments (buy to rent out).

Prices are now rising slowly again, but the London dive certainly gives hope Amsterdam, where the self-ownership obligation for starter housing was introduced last month. In short: Whoever buys a house with a WOZ value of a maximum of 512,000 euros may not rent it out commercially for four years.

With the scheme, the municipality hopes to make it more difficult for investors. The housing crisis is not just a matter of building, building, building – of lack of new construction. Buying homes from investors also plays an important role. Including in Barcelona and Berlin protested against investors. In Berlin, people even voted to expropriate large real estate companies.

Also in Irish Dublin Concerns about the housing market have been rising for years. It is not for nothing that Mayor Alison Gilliland, elected in 2021, called living one of her priorities: She was talking about a ‘ticking bomb’. Last year, the national government announced that it would invest a record amount of € 4 billion annually in building housing.

There is no city like Amsterdam, but many issues that concern us also play a role elsewhere in the world. In the World City series, we examine how other cities handle this.