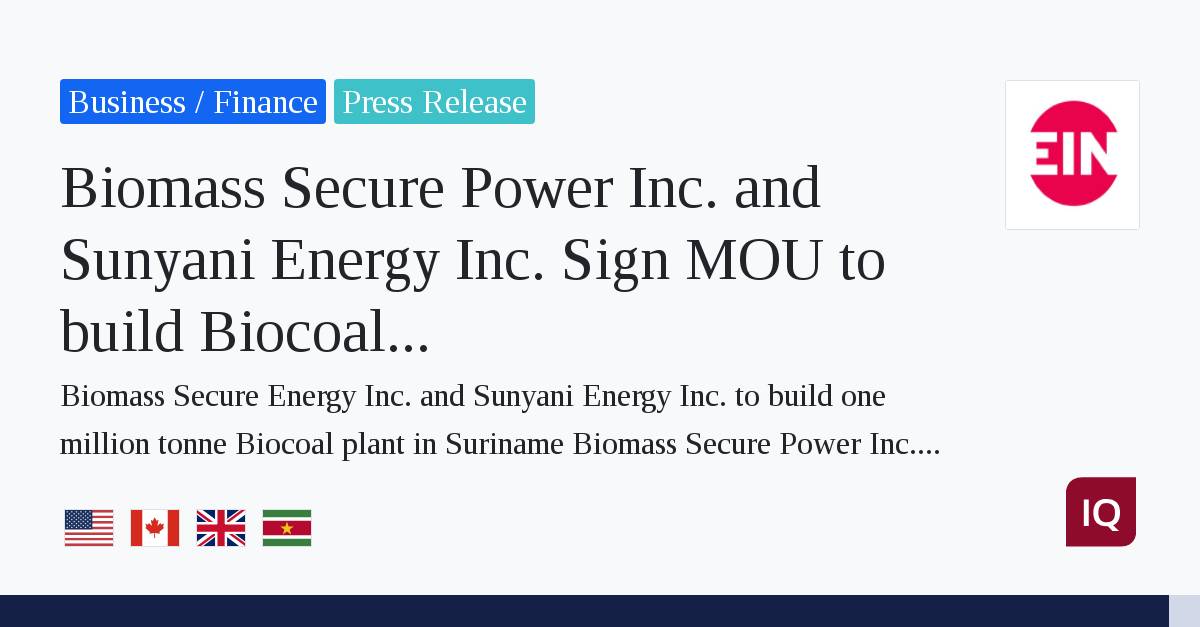 Minister Tjong-Ahin knows nothing about it …

Several news sites reported on Tuesday, May 11, that the Canadian company Biomass Secure Power Inc., BSP, in Chilliwack, British Columbia, has signed a memorandum of understanding with Sunyani Energy Inc. in New York (USA) for the construction of a million tonne biochar plant (biochar) in Suriname. Each party gets 50% in the new company, it is stated.

BSP provides patented technologies and procurement agreements for the Sunyani project. Sunyani Energy will provide a construction site for construction, a long-term agreement to supply sustainable and sustainable fibers, as well as project financing. Sunyani owns a port facility in Suriname from which biochar will be exported, news reports said.

“I do not know about this, this is news to me”

In response to media reports, the editorial staff of Dagblad Surinam approached the Ministries of Spatial Planning and the Environment (Silvano Tjong-Ahin), Natural Resources (David Abiamofo) and Foreign Affairs, International Business and International Cooperation (Albert Ramdin) for an editorial. Only Minister Tjong-Ahin has replied: “This is news to me. Do not know about this.” His two colleagues have not yet responded.

Biochar, a product made by thermally upgrading biomass, is gaining popularity around the world as countries seek more renewable energy sources in an effort to reduce dependence on coal and reduce greenhouse gases. Presumably, this involves the production of fuels made from biomaterials, such as those in Suriname, which can be wood, rice husks, charcoal, coconut bark, etc.

Biomass Secure Power Inc. owns a patented process for the production of biochar, a substitute fuel used in coal-fired power plants. Biochar reduces CO2 emissions by up to 96% compared to other coal burning applications. The BSP process produces biochar at 21.5 GJ / T at competitive costs, compared to pine pellets at 17.4 GJ / T. The company has produced samples of up to 24.5 GJ / h, which are currently being tested by customers interested in metallurgical applications.

BSP believes that climate change is the world’s biggest challenge and is committed to reducing CO2 emissions into the atmosphere and will continue its research efforts to reduce CO2 emissions.

The Energy Management Division was established to help customers manage their energy and sustainability needs wisely, increase their economic viability while reducing their contribution to climate change.

Sunyani Energy’s primary function and focus is renewable energy. The Energy Division works with the development, design / planning and construction of public / private electrical communication infrastructures. The company states on its website that it specializes in sustainable solutions in energy, lighting and water production.

The question now is whether a biochar plant will actually be built in Suriname. The editors of Dagblad Surinam have of course approached both companies to get answers and, among other things, asked if they are in contact with the
Suriname’s government and why Suriname was elected, but there has been no response at present.