Existing medical technology can virtually solve the huge staff shortage in geriatric and hospital care in 2031. That’s what Gupta Strategists says in a new study. To fulfill this great promise, the obstacles that have stood in the way of successful implementation for years must be removed.

Staff shortages have become one of the biggest problems for the Dutch healthcare sector in recent years. This year, the healthcare sector is facing a shortage of around 48,600 employees, and all forecasts show that this shortage will explode further in the coming decade: According to the latest labor market forecasts, the shortage will increase to no less than 135,000 employees by 2031.

The problem is now so structural that a solution seems far away. But were we not just afraid that robots would take our jobs? – how can the rapid advancement of technology be reconciled with this growing shortage of human hands? They probably wondered that at the FME as well. The Technology Industry Entrepreneurship Association engaged Gupta Strategists in a study.

The Agency has specifically looked at how much of the staff shortage can be removed in hospital and elderly care, the two segments where the shortage is greatest in both absolute and relative numbers. Hospitals are expected to face a shortage of 67,000 staff by 2031, while in elderly care it will be 31,000. In total, there is therefore a shortage of 98,000 employees.

Furthermore, the strategic nursing advice deliberately focused only on the potential of existing technology, “to determine as concretely as possible the impact of the technology and to outline what is possible with better implementation”, according to the researchers.

They looked at nearly 100 applications from all categories: from medical devices and aids, mobile communications and telecommunications to the Internet of Things, artificial intelligence and information recording.

The analysis shows that such existing technologies, if used effectively, could potentially free up as many as 110,000 healthcare workers – 12,000 more than the expected shortfall of 98,000. “With this, we are showing that medical technology is of great importance in tackling staff shortages in healthcare,” says Gupta.

According to the consulting firm, medical technology can achieve this huge savings in roughly two ways. First, by preventing care: “For example, by reducing the chance of a complication so that less follow-up is needed, or by enabling people to take better care of themselves.”

Secondly, by facilitating the tasks of healthcare professionals. This allows the same group of employees to provide more care. “For example, because technology shortens the duration of medical procedures, or because robots and algorithms take over tasks.” By reducing the burden, vital healthcare professionals can also be retained and administrative tasks taken over. 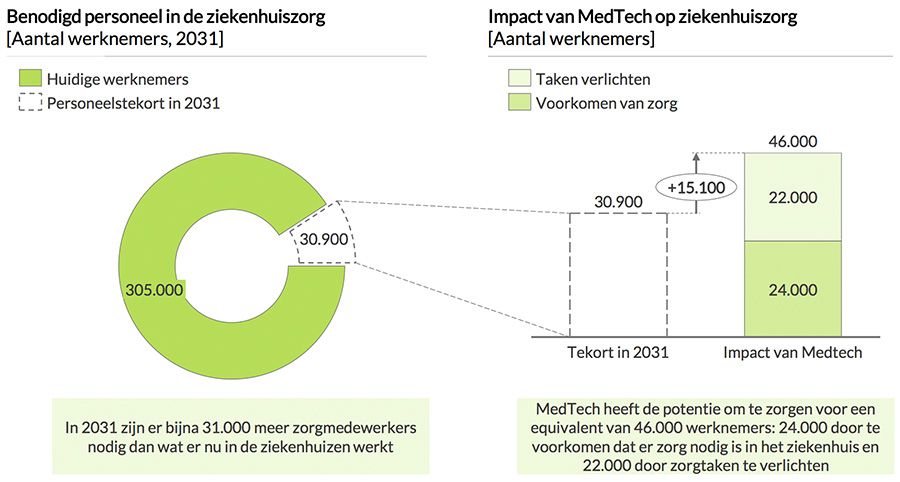 This remaining shortage is therefore the reason why Gupta is not talking about completely eliminating the shortage of hospitals and elderly care, while more jobs are being released than the shortage of the two segments combined.

The Netherlands has an implementation problem

Despite this remaining shortage, the potential is enormous, especially given the urgency of combating the enormously increasing shortage. Even more encouraging is that these are already existing technologies – we are not by definition dependent on uncertain prospects for future innovations.

However, this immediately raises the question of why the huge staff shortage is rising so fast – why are these already existing technologies not yet widespread? Of course, Gupta Strategists also asked itself this question, and in short, the conclusion is that the Netherlands has “an implementation problem”.

This was approved when the report was received by Health Minister Ernst Kuipers, who himself was head of health for many years before his recent move to The Hague. “Hard” – this is what he called the implementation of new technologies in healthcare: “In the end, sometimes you just need more staff instead of less.”

Gupta sees four fundamental causes of the implementation problem. Firstly, there is a lack of a sense of urgency: the high workload is felt, of course, but it translates into the search for new people rather than changing care processes so that technology is used optimally.

Secondly, there is a lack of knowledge about health technology at all levels – from politics to hospitals to living rooms – and therefore the action perspective is also lagging behind. “People know little about what is (already) technically possible, what its impact is, and what is needed to successfully implement technology in healthcare processes.”

Third, conflicting economic incentives hinder investment. Investments are sometimes difficult to justify because they make the revenue disappear or because the benefits lie elsewhere than the costs. Healthcare institutions are also simply struggling with lack of money, and health insurance companies are reluctant because they want to keep premiums low in their competition.

Finally, the fragmentation of the sector stands in the way of a positive business case. Large patient volumes are often required to use innovative infrastructure (cost-effective). The fragmentation also means that technology suppliers have to offer (expensive) customization. Upscaling would be a solution, but cooperation is hampered by (a sense of) mutual competition.

What are we waiting for?

Given all these obstacles, the solution suddenly no longer seems so close, but Gupta emphasizes that they can all be removed, that it is in everyone’s interest to work on them, and that all stakeholders – health organizations, health insurances and health offices, technology industry, government and citizens – have instruments to promote the use of technology.

“Overall, we are hopeful,” according to the researchers. “If all parties work together and act in the same way, a lot is possible. Corona has shown how quickly the introduction of new methods in healthcare can go if it is felt that it is urgent enough. What are we waiting for?”