STOLWIJK – Gertjan Snoek, 31, a dairy and poultry farmer on Schoonouwenseweg, is concerned about the evolution of nitrogen when he sees what it will mean for his business. With its 85 cows, about 40 cows would have to go and of the 23,000 chickens, about 10,000 would also have to go if the plans as they are now are implemented. “It is simply not possible to continue the business”

Since high school, Gertjan Snoek has been determined. He also wants to become a farmer and eventually take over his parents’ business. After high school, he therefore chooses MAS (Secondary Agricultural School), where he learns all about agriculture for four years. After this education, he makes the HBO variant HAS (Higher Agricultural School), where the focus is on business management. After a total of eight years of training, Gertjan is completely ready and in 2015 he will be co-owner of the Snoek-Vliet partnership.

company
The company currently has about 85 cows and 23,000 chickens. In both cases, it is a medium to small business, for an average chicken breeder quickly has 45,000 chickens.
The eggs from the chickens are sold as Stolweitjes in local supermarkets and since 2018 they have also made and sold cheese. The rest of the milk is delivered to the factory, but the company cannot exist alone.

Measures
If the measures regarding nitrogen are continued as they are now, it means for Gertjan and most farmers in Krimpenerwaard that there must be a reduction of 47% of the livestock. Specifically, this means he has to shrink 40 cows and 10,000 chickens. No farmer can survive with the products (milk, cheese and eggs) left over. It then becomes seriously necessary to apply for another job next to the farm to get bread on the table. No farmer survives if so much is to be reduced, not at all if the cost price remains at the same level.
“Let’s not talk about what it does with, for example, the price of milk, which has already risen because there is a little less production. It will shoot through the ceiling if the crew at the national level is halved, and the question is whether the consumer is willing to pay that price. ”
“Ultimately, everyone needs the farmer three times a day (every meal, ed.), And you can’t live without food.”

Solutions
Solutions can be found, says Snoek. For example, there are already innovations where manure is processed into manure that releases less nitrogen than when manure is spread out over the soil. A large reduction in nitrogen can be achieved through these plants, perhaps even more than by halving the livestock.

Actions
By holding campaigns, farmers hope that the policy as it stands now will eventually be dropped. In any case, it should remain a topic of conversation. The blockades of distribution centers and motorways mean that the need is great in The Hague, and we, the farmers, are also invited by the national media. “If, for example, we were to block the N210, we would at most have a nice article on RTV Krimpenerwaard, which is also very nice, but we are not sitting at Beau’s table or we are in the NOS Journaal.”

Knot in your handkerchief
Currently in Krimpenerwaard we see inverted flags and peasant scarves everywhere along the roads, this is part of the national campaign: “Knoop in je handkerchief”.

When asked about this action, Gertjan says that it is not even about everyone putting their car along the road or making noise by honking their horns or the like, but it is primarily about awareness, showing people that something is really going on. is now a problem for farmers, but is only the beginning of the government’s approach to nitrogen. Farmers have put flags on lampposts throughout the Krimpenerwaard to make people aware of the problem.

When asked whether there are more initiatives from the farmers on the way, Snoek can answer that it is not really ready yet, as long as the plans are in place, action is taken. This can happen with playful actions (such as the handkerchief and the flags), but there is also the possibility that more harsh actions follow. 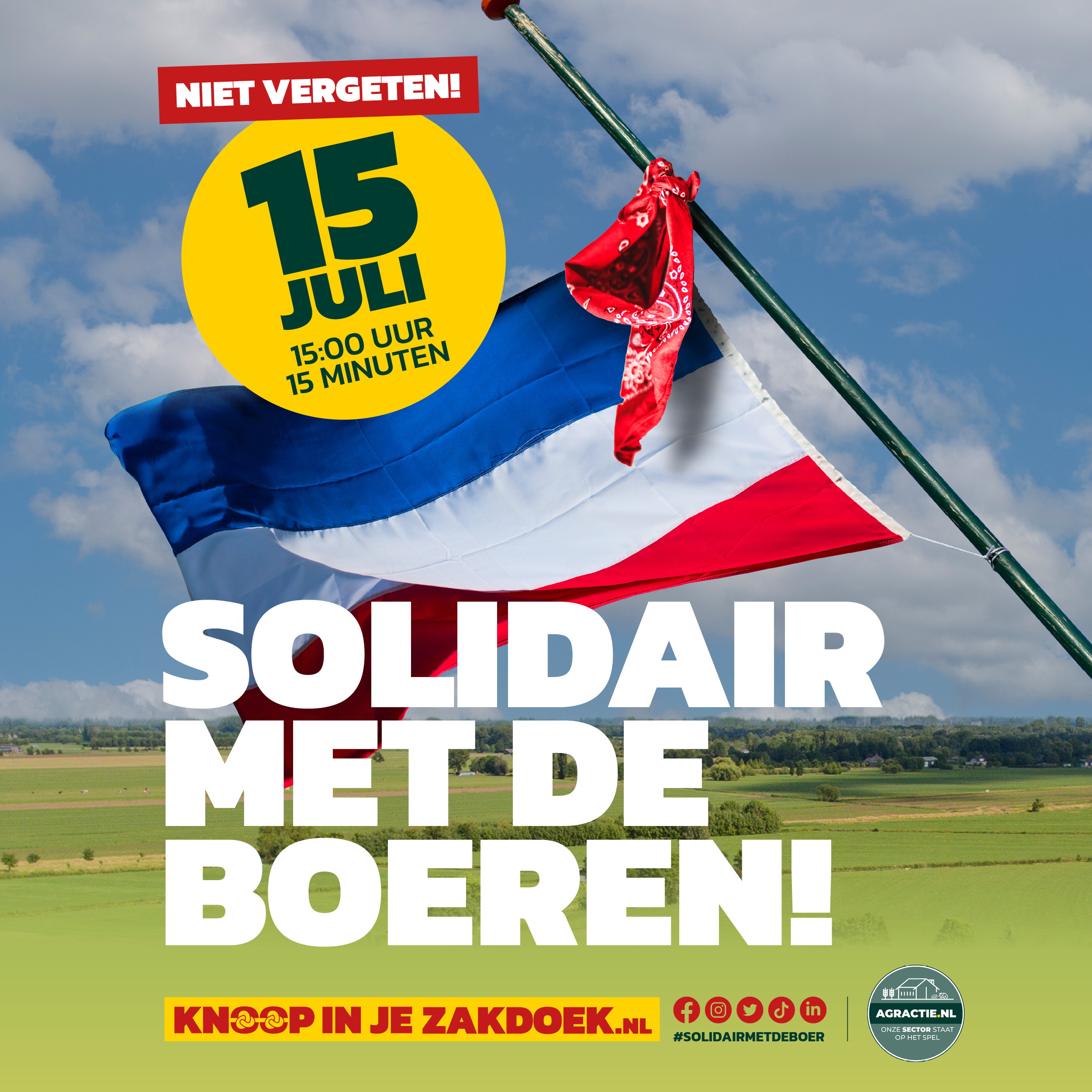