WATERINGEN – BAB-VIOS Touringcars from Wateringen in South Holland celebrated their centenary on July 1, 2022. Earlier this year, the company added a new Intouro and Tourismo to its fleet, which also includes a Setra double-decker. Director Michel Kortekaas: “We are celebrating our anniversary in September. It is also a tribute to the generations before me who have put their soul and joy into our business.”

BAB-VIOS has completed the first century of its existence as a bus company on July 1, but the company’s original roots go back even further. Exactly until around the year 1900. At that time, the Lipman family started a bicycle workshop in Wateringen. It grew rapidly, after which his son Piet Lipman founded his own bicycle factory in 1911 under the name VIOS Rijwielfabriek, the abbreviation of Progress Is Ons Streven.

That name turned out to be a good choice because there was a lot of progress. In 1922, Piet Lipman was given the opportunity by Wateringen Municipality to operate a bus connection in the region from 1 July the same year. He seized that opportunity with both hands. The manufacture of bicycles ceased and the focus shifted entirely to transportation activities. It was the beginning of a rapid development.

Ten years later, in 1932, VIOS had grown into a transport and bus company with a fleet of 60 buses and a very beautifully designed ‘Torengarage building’, which now stands as a national monument in the center of Wateringen. The current name of the company, BAB-VIOS, is due to the acquisition of Buitelaars Auto Bedrijf (BAB) in 1951.

In 1946, VIOS had also taken over another company, namely Eerste Dordtse Auto Dienst (EDAD), which later continued independently under the leadership of one of Piet Lipman’s sons. Today, liner shipping is no longer an activity in the company, but what has remained unchanged is the entrepreneurial spirit.

The descendants of Piet Lipman still work in the company because current director Michel Kortekaas is married to the grandson of the founder Piet Lipman. She also works in the company, as do their two sons. Michel Kortekaas explains: “A lot has happened in our long history. By the end of the 1930s, for example, VIOS had grown into a very successful and large company, but after World War II it had to be completely rebuilt. I can say that Piet Lipman and later also his son Jan, my father-in-law, gave everything for the company. I therefore certainly see our centenary, which we celebrate in September, as a tribute to them. ” 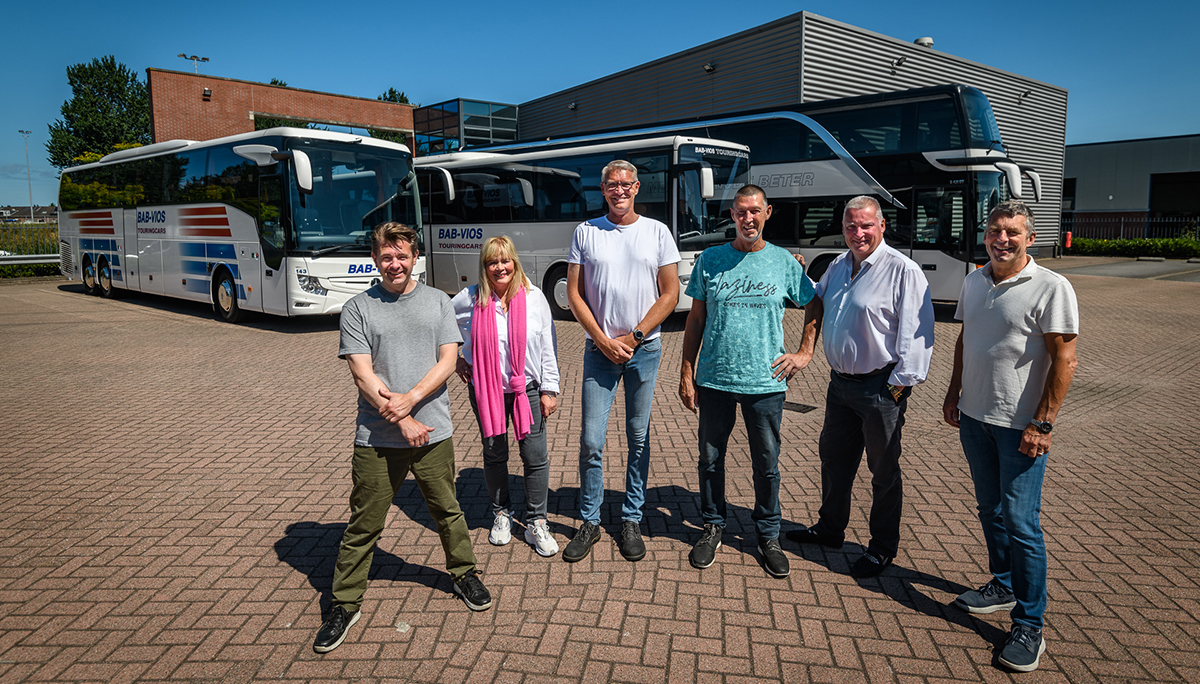 On the question of highlights that come to mind when he thinks of the history of BAB-VIOS, Michel Kortekaas immediately mentions the special bond the company has for double-decker buses. In 1930, Piet Lipman got the very first European double-decker as ‘Travel and sleeping car’ built by the company Lith in Rotterdam, which made him far ahead of his time. In 1970, his son Jan repeated that feat again, with the arrival of a 4 meter high Neoplan double-decker bus. It was the very first post-war double-decker bus on the Dutch road and a major attraction. We still have a double decker in our fleet. It is really a tradition within BAB-VIOS, which is also very interesting from a business economics point of view. Just think: our Setra double-decker can accommodate 88 people, while you only need one driver. You can reduce costs significantly and increase your margin. “

There is a fine anecdote attached to the double-decker from 1970, says Michel Kortekaas: “The height of 4 meters was quite a problem at the time. As a child, my wife helped her father survey all the viaducts in the region so they knew where our double-decker would fit. She did not measure it with special measuring equipment or anything, but with a fishing rod. And it worked great! “ 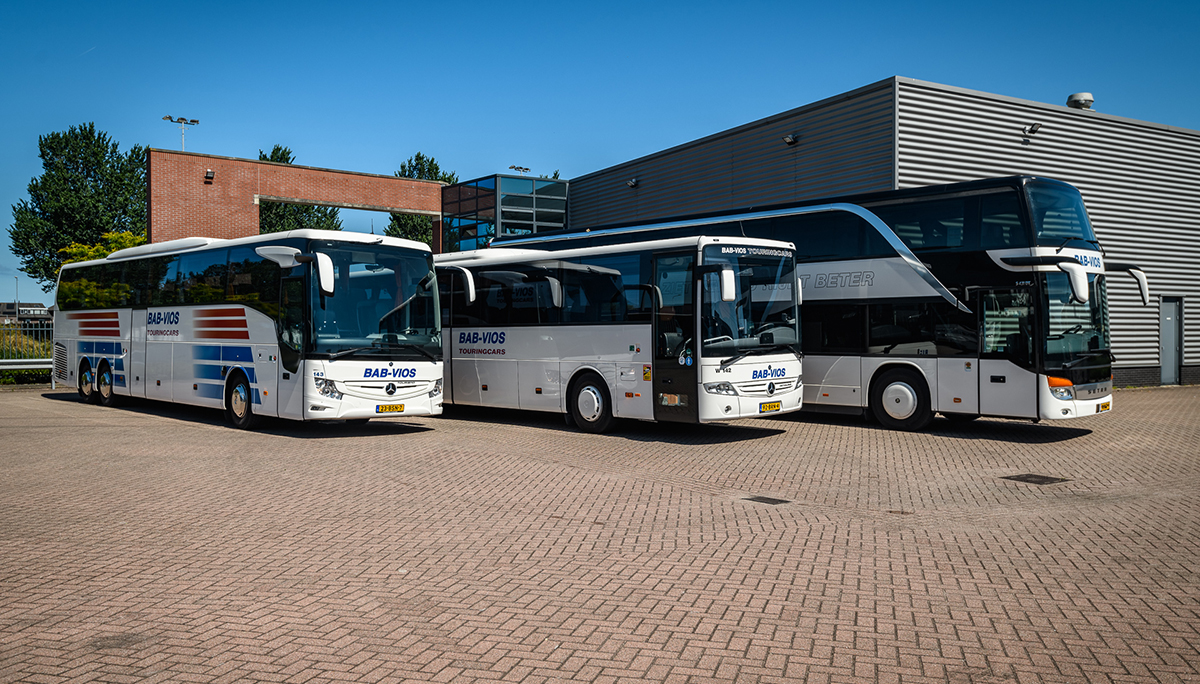 The fact that BAB-VIOS is still a thriving company after 100 years is partly due to the company’s current business model. It has a strong position in the Hague region, where under the name BAB-VIOS Touringcars on the one hand it focuses on group transport in the local region for, among others, The Hague Municipality, museums, companies and schools. On the other hand, the company with its brand Hofstad Tours is very active with transport tasks for ministries, embassies and other government institutions. Michel Kortekaas: “Our Hofstad Tours coaches clearly stand out. They are made in a stately, dark blue color with the Kroon logo and have extra luxurious facilities. Like BAB-VIOS and Hofstad Tours, we serve two markets in this way and successfully. ”

The pillar of success with the BAB-VIOS is also the choice for the quality of the fleet, which consists of 18 vehicles. Michel Kortekaas: “All our buses are from Mercedes-Benz. This is not without reason, because we believe in quality. The production method, the spare parts supply, the appearance, the quality of the vehicles; Mercedes-Benz simply offers the very best on all fronts. This also applies to maintenance that we have outsourced to EvoBus. There are never any details. Extensive winter maintenance once a year is sufficient. That’s enough to say. “

The latest additions to the fleet were a 12-meter Mercedes-Benz Intouro (the 6th already!) And a 14-meter Tourismo, which BAB-VIOS received earlier this year. “They are both luxury buses, but our Tourismo takes the cake with its very rich equipment. He who is in it is truly the king of riches. “ 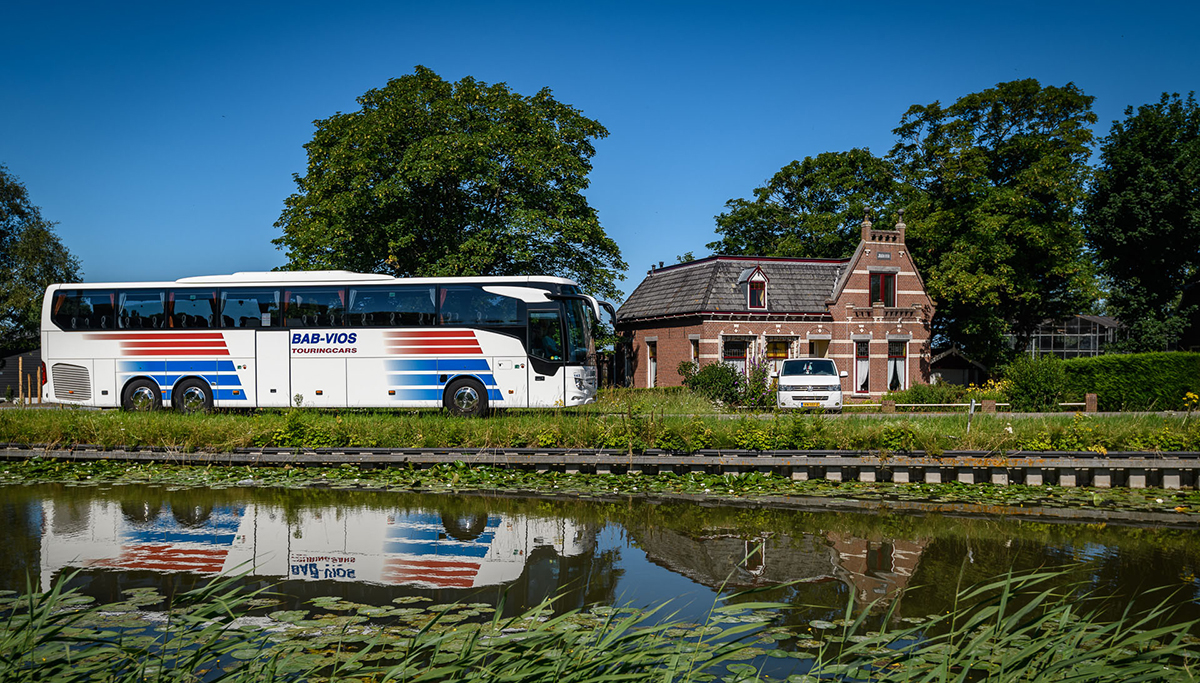 As can be read on the BAB-VIOS website, the company has a strong eye for sustainability and the fleet is characterized by its modern, environmentally friendly Euro 6 engines. Sustainability is important to Michel Kortekaas, but the director of BAB-VIOS has a comment.

“Striving for sustainability is a good thing, but it must be possible at an achievable pace. Now politics and regulation sometimes seem to forget it, so we as a sector have to make one investment after another. It’s important, “As a sector, we have proved to be indispensable in the Dutch logistics model. I hope the government will be aware of that.”