With a wonderful fourth place in Saturday’s race and an unfortunate nineteenth in Sunday’s race, Rinus ‘VeeKay’ van Kalmthout had mixed feelings about the doubleheader weekend at Iowa Speedway.

After finishing fourth at the challenging Mid-Ohio circuit and keeping his cool despite difficult conditions on the streets of Toronto, Rinus VeeKay joined his NTT INDYCAR Series competitors at Iowa Speedway. The 0.875-mile oval hosted the 11th and 12th IndyCar games of the 2022 season.

During qualifying, which was held on Saturday morning (local time), VeeKay, who could also be admired this weekend in the #21 Bitcoin Racing Team with BitNile Chevrolet, came out strong. The 21-year-old Dutchman scored a fine eighth for the first match and scored a ninth for the second company. Iowa Speedway, or The Fastest Short Track on The Planet, proved again this year to be a track to VeeKay’s liking.

During the first race, the 250-lap Hy-VeeDeals.com 250 presented by DoorDash, VeeKay steadily worked his way up front. The one-time IndyCar race winner fought fierce duels with NASCAR record holder Jimmie Johnson, a former oval specialist, and ultimately decided it in his favor. VeeKay drove a close race where he could easily keep up with the pace of the front runners.

Excellent tire management gave VeeKay his second fourth place in the month of July. Afterwards, the Ed Carpenter Racing driver was satisfied, despite coming just a tenth down at the finish to hold off Will Power from third. Nevertheless, VeeKay was proud that he rode to a top ten finish for the fifth time in 2022.

“It was a really good race, I enjoyed it,” VeeKay said Saturday night. “After a good qualifying race, I was allowed to start from the front and I was able to fight good battles throughout the race. I am very satisfied with this fourth place. From the first practice, when I recorded the fastest time in no-tow, I had the feeling that a good classification was possible.” 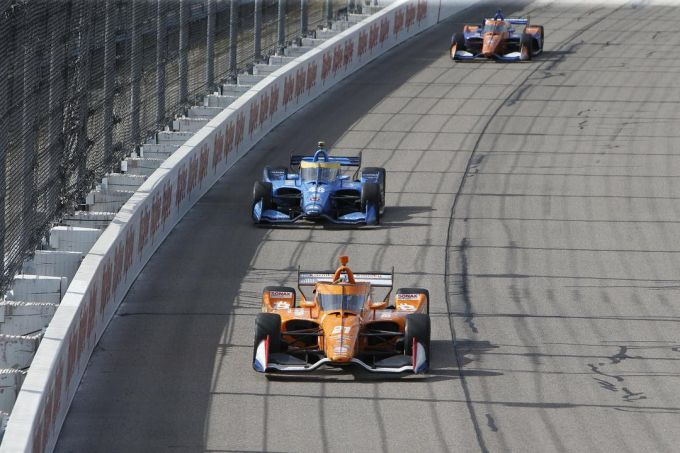 On Sunday, the Hy-Vee Salute to Farmers 300 presented by Google was held for 300 laps. After a grid penalty from one of his competitors, VeeKay was allowed to start eighth again. The Dutchman stayed in the top ten and, as usual, fought beautiful duels with some of his opponents.

A very poorly timed neutralization ruined VeeKay’s run. As the Dutchman drove in for his second service on lap 117, a full neutralization was declared three laps later due to an accident. Where VeeKay had to make his pit stop under green and as a result lost two complete laps of the race, his opponents were able to pit during the neutralization time. As a result, VeeKay’s chance for a top spot was by definition lost. 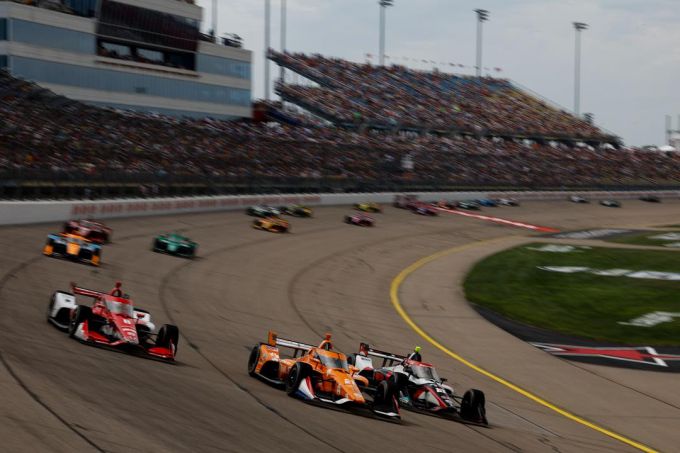 VeeKay continued his run well behind, aiming to complete as many laps as possible. The Dutchman kept his cool – even after a drive-through penalty for crossing the yellow line when entering the pit lane –, kept his car out of the chaos and drove to the finish line, where his share turned out to be nineteenth.

“I can be brief about the second race. In terms of pace, of course a better classification could have been achieved, but Full Course Yellow was completely wrong”, said VeeKay afterwards. “I can think about that, but it makes so little sense. It went the way it went and that’s what we’re going to do. I tried to give Ed Carpenter Racing as much extra data as possible by finishing the race and it worked fine. For now it’s a quick change and off to Indianapolis Motor Speedway Road Course, where I won my first IndyCar race. I can’t wait to drive that track again!” VeeKay concludes defiantly.

VeeKay occupies twelfth place in the intermediate position with 254 points and still has a good overview of the top ten.

The Gallagher Grand Prix takes place in six days. The thirteenth race of the NTT INDYCAR Series championship will begin on Saturday, July 30 at approximately 18.30 Dutch time. The match can of course be followed live via Ziggo Sport.